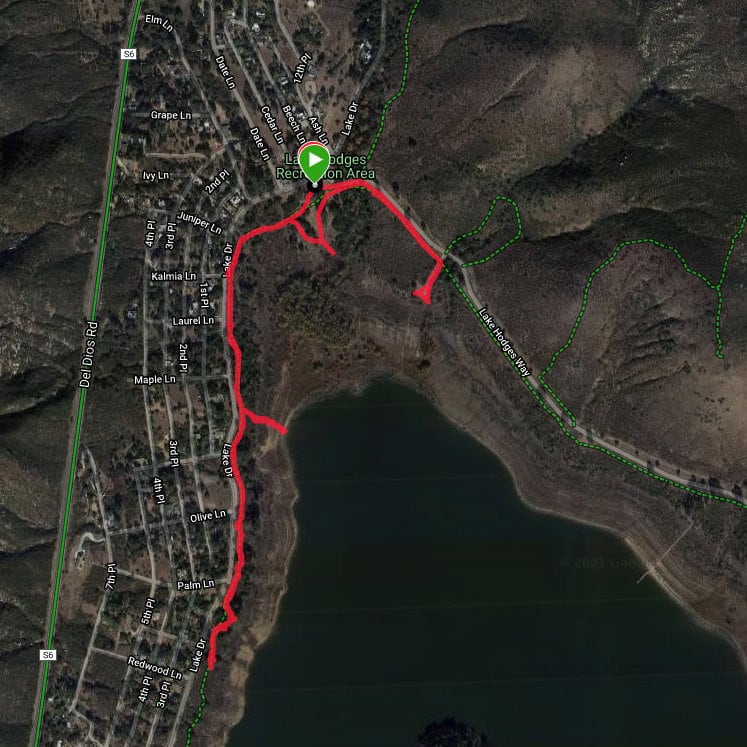 Shortly before 7:30 AM, I set out from Del Dios Community Park on the Coast to Crest Trail, heading south alongside Lake Drive. Within a few moments I spotted several different species, including California Quail, American Crow, California Towhee, Spotted Towhee, Nuttal’s Woodpecker, Cooper’s Hawk, and Bewick’s Wren (several of which were quite vocal at different points on the trail throughout the morning). 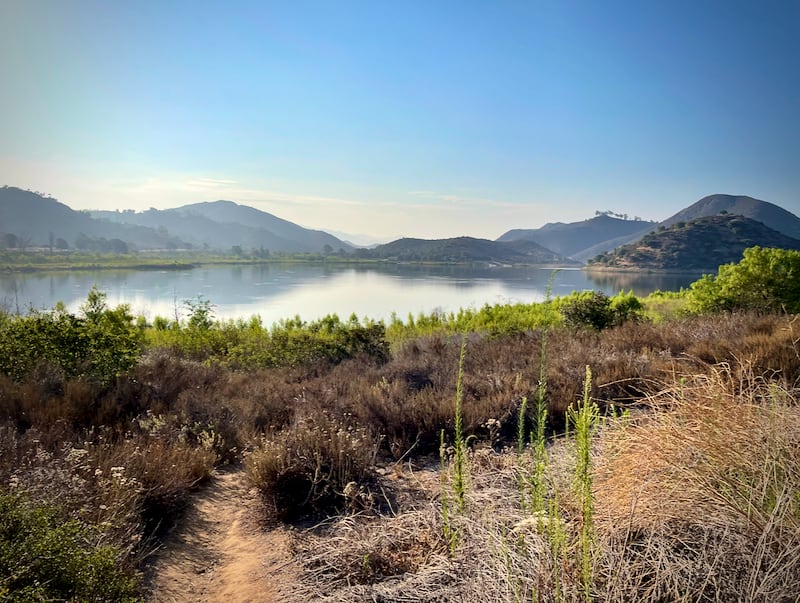 Just around a bend in the trail, I came upon a Red-shouldered Hawk—no more than 30 feet away—perched on a tree limb with its back to me. I quietly took my phone from my pocket, opened the camera app, and snapped a quick photo. Unfortunately, I forgot to switch the phone to silent mode; the sound of the shutter scared away the bird.

A little further on, I took a spur down to the shore of the lake. Along the way I came across several Lesser Goldfinches and Song Sparrows in the bushes next to the trail. At the water’s edge, a Great Egret searched for prey in the shallows. A Double-crested Cormorant was sunning itself atop a buoy further out in the lake. In nearby trees, several Great-tailed Grackles made their voices heard. A Forster’s Tern circled above the water, looking for a snack. 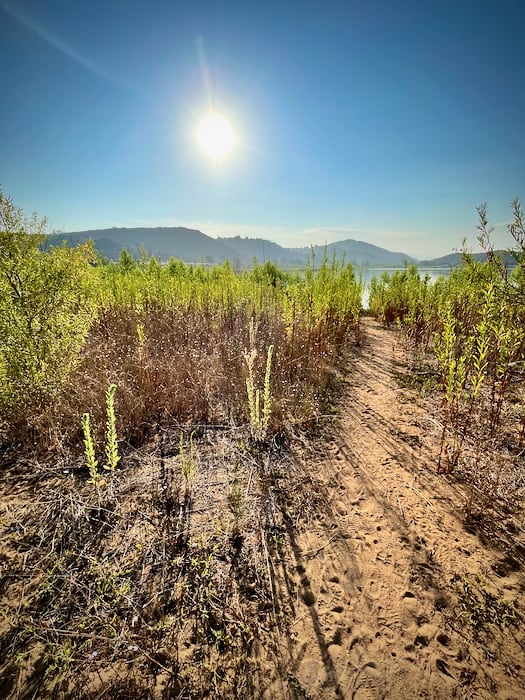 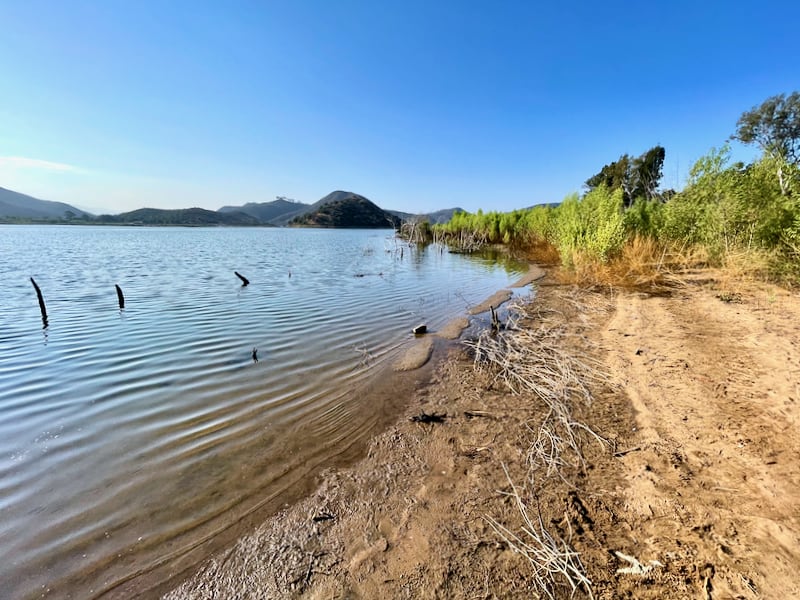 While enjoying the way the sunlight was playing on the water’s surface, I heard the loud rattling call of a bird I had yet to see with my own eyes: the Belted Kingfisher. I knew this beautiful creature could be found near the lake, but until now it had eluded me. 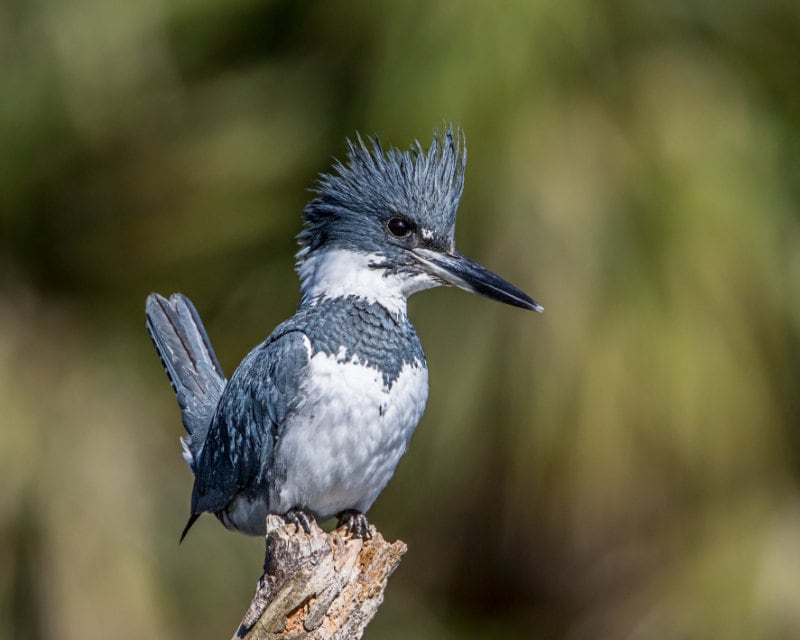 I continued to listen, hoping to locate the bird. And then I spotted it, maybe 50 yards away, perched above the water. I watched it through my binoculars for a moment before I realized it wasn’t alone; two other Belted Kingfishers were perched nearby. Suddenly two of the birds took to flight, darting and wheeling together just above the water before settling in a tree further up the shoreline, from where they gave a concert with their strange-sounding voices.

Returning to the main trail, I continued hiking south, toward the dam. More Bewick’s Wrens could be heard in the treetops, along with Allen’s and Anna’s Hummingbirds. A pair of Downy Woodpeckers played in the dense canopy of branches and leaves. An Ash-throated Flycatcher delivered an impassioned speech, but I couldn’t understand it.

After turning around and heading back toward where I started, I caught sight of a White-breasted Nuthatch looking for food in the tree limbs above my head. Just off the trail, atop the remains of a fire-damaged tree trunk, a California Scrub-jay issued a series of scratchy calls.

By 9:00 AM or so, the day was beginning to get quite warm. I decided to make my way quickly over to a few spots to the east of Del Dios Community Park before heading home. Several Mourning Doves and Acorn Woodpeckers were camped out in trees along the way. Three Turkey Vultures circled high up in the sky. Just when I decided to head back to the parking lot, I spotted two Lesser Goldfinches perched on a limb, playing neighbor to an American Kestrel. 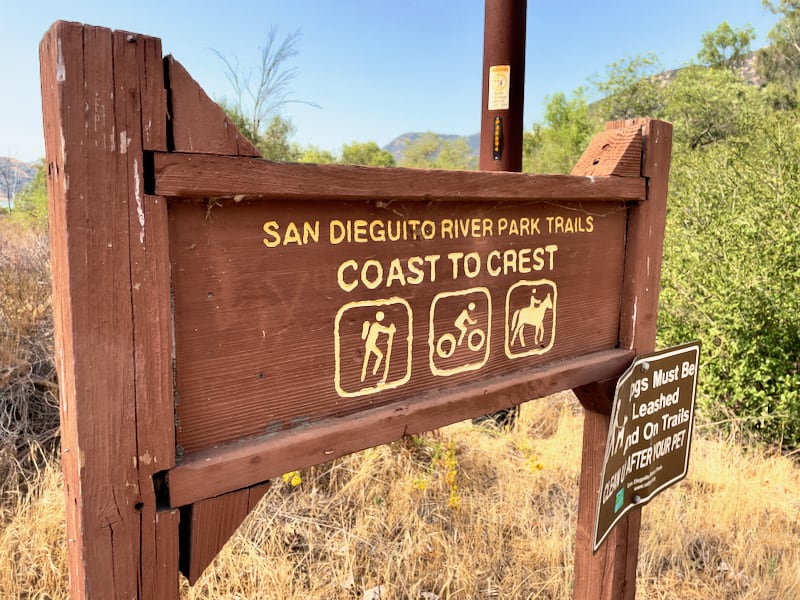 All in all, it was great to be out on the trails again, watching, listening, observing. In addition to a variety of birds, I saw a rabbit or two, lizards, Tarantula Hawks, butterflies, and numerous dragonflies. Curiously, I didn’t cross paths with any rattlesnakes.

You can find the full checklist of birds sighted here.